Home » TYPES » Parasites » Viscum capense
Back to Category Overview
Total images in all categories: 10,366
Total number of hits on all images: 5,071,709 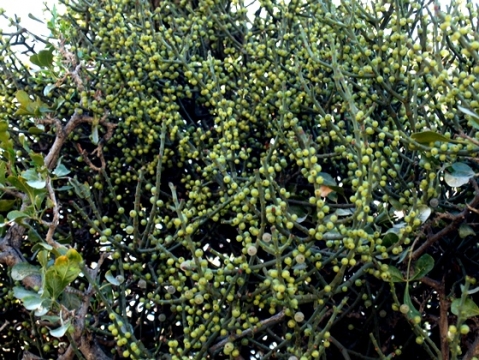 Viscum capense, commonly known as mistletoe or in Afrikaans as litjiestee (small joints tea or small segments tea), is an aerial parasitic perennial forming dense clumps to about 50 cm in diameter.

The plant usually lives on branches of hosts in the Euclea, Maytenus, Salix, Lycium or Pterocelastrus genera. The specimen of the photo is doing well on a Searsia shrub north of the Swartberge near the Seweweekspoort.

The species distribution is widespread, from Namibia through the Northern Cape and Western Cape, eastwards to the Little Karoo.

The habitat is the bigger shrubs in the seasonally dry watercourses of the commonly semi-arid to arid lowlands. The species is not considered to be threatened in its habitat early in the twenty first century (Vlok and Schutte-Vlok, 2010; Le Roux, et al, 2005; Shearing and Van Heerden, 2008; iSpot; www.redlist.sanbi.org).