Home » TYPES » Parasites » Thesium strictum wispy habit
Back to Category Overview
Total images in all categories: 11,656
Total number of hits on all images: 6,771,241 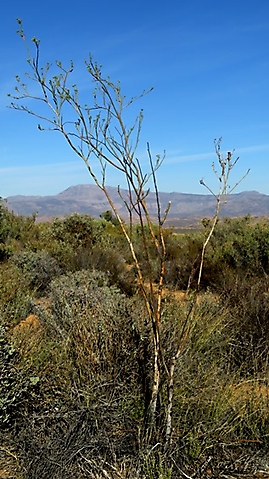 Thesium strictum shrubs may be erect, tall and broom-like from being sparsely branched in their upper parts. The lowest stem parts in picture are whitish, the young stems near the top green, while the middle sections are brown. This one was seen at Kagga Kamma during September.

Lower leaves are oblong or narrow to needle-like, up to 6 cm long, while the upper ones are much shorter. The plant generally has few, inconspicuous leaves.

The plants usually look their best in new veld during the first few years after a fire (Vlok and Schutte-Vlok, 2015; Privett and Lutzeyer, 2010; iNaturalist).