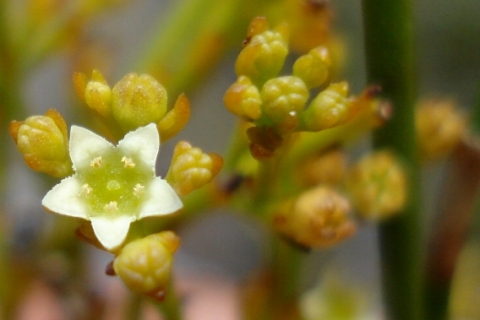 Thesium is a genus of shrubs and herbs parasitising partly (hemiparasites) or fully (holoparasites) upon the roots of plants growing around them; partly, because some also photosynthesise, but not enough for their growth needs. The plants are usually glabrous, i.e. hairless.

Thesium leaves are alternate, varying in shape from linear, narrowly lance-shaped, awl-shaped, scale-like or nearly round.

The bisexual flowers grow axillary or terminal in racemes, spikes or panicles. The five-lobed white perianths are tubular or cup-shaped, somewhat fleshy and brittle. There are five stamens growing from the insides of the perianth lobes. The anthers are oblong or ovoid. The ovary has three segments. The style is cylindrical, its stigma three-lobed or capitate, i.e. shaped like a head or dense cluster.

The fruit is a roundish nut, usually ten-ribbed and the perianth persistent.

There are about 330 Thesium species worldwide, mainly found in tropical and subtropical parts of the Old World, while about 80 species grow in the fynbos. Some thesiums are browsed, although certain species are seasonally toxic.