Home » TYPES » Parasites » Thesium strictum
Back to Category Overview
Total images in all categories: 11,921
Total number of hits on all images: 7,169,003 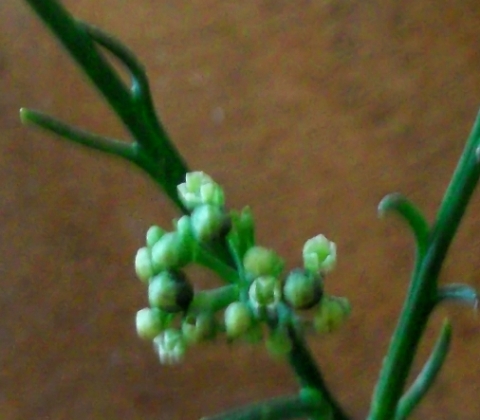 Thesium strictum, in Afrikaans commonly known as bokbos (buck bush) or teringbos (tuberculosis bush), is a root parasite shrub reaching 2 m in height. The leaves are linear, about 1 cm long and 3 mm wide, tending to dry early and drop off.

The greenish yellow to almost white, fleshy flowers grow in nearly flat-topped clusters at branch tips. The flowers are cup-shaped with five erect or spreading, acutely pointed perianth lobes. A flower becomes about 3 mm in diameter. The flowering season is spring and summer.

The widespread species is distributed in a broad coastal swathe from the Northern Cape and the Western Cape to the Eastern Cape.

The plants grow among varied vegetation types and rainfall levels, often in dry fynbos. It is not considered to be threatened in its habitat early in the twenty first century (Vlok and Schutte-Vlok, 2010; iNaturalist; http://redlist.sanbi.org).