Home » TYPES » Parasites » Thesium euphorbioides
Back to Category Overview
Total images in all categories: 11,124
Total number of hits on all images: 5,797,884 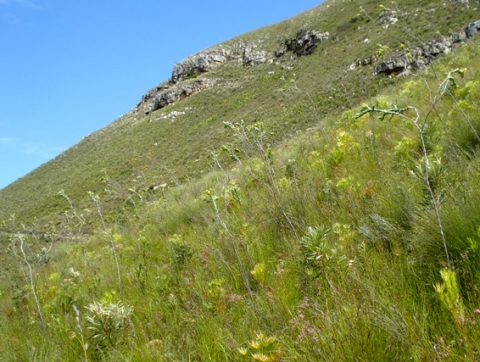 Thesium euphorbioides is a slender, single-stemmed shrub that reaches 2 m in height. The plant is a hemiparasite, partially parasitic upon the roots of neighbouring plants, as are the other members of the genus.

There are about 330 Thesium species worldwide, mainly found in tropical and subtropical parts of the Old World while about 80 species grow in the fynbos.

These tall plants in the photo tower over young fynbos next to a Fernkloof Nature Reserve path. Although the plants are single-stemmed, their parasitic dependence upon host plants is probably allowing them to resprout, getting early head-start over the reseeder plants around them.

That may mean they had picked other resprouters for support, or would have died with their hosts in the fire. It may also be that tall hemiparasites photosynthesise better, thus becoming less dependent upon their hosts and enabling them to grow fast (Manning, 2007; Bean and Johns, 2005; Vlok and Schutte-Vlok, 2010).