Home » TYPES » Parasites » Tapinanthus oleifolius
Back to Category Overview
Total images in all categories: 11,506
Total number of hits on all images: 6,503,392 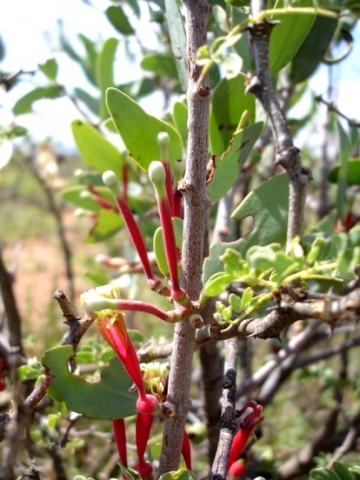 Tapinanthus oleifolius, the lighting matches or mistletoe, is a half-parasitic, evergreen shrublet, growing on branches of other shrubs and trees. Such growth comes about when birds eat the fruits and deposit the sticky seeds on the branch of their perch during the meal. They have to wipe vigorously to dislodge the unattractive part from their beaks. Here the seed quickly germinates, pierces the bark and starts drawing nutrients from the host plant. This is done because this species has a specialised type of root claw, a haustorium, adapted for such invasive squatter behaviour.

Once established, the parasite may grow red-brown stems of 1 m, covered in lenticels, white dots on the bark. Blending with the host’s foliage, the mistletoe plant is often only detected if the host is deciduous and leafless in winter, or when some mistletoe fruits and flowers are spotted on the ground.

The leaves are usually opposite each other on the stem. They are glabrous and glaucous, i.e. hairless and blue-green, elliptic in shape and variable in size with entire margins. The plant’s distribution is widespread in the northern provinces of South Africa and several of the neighbouring countries.

T. oleifolius grows on a wide spectrum of host species, including Vachellia, Senegalia, Combretum and Diospyros. The species distribution in South Africa is in the north of the country, in Limpopo, North West, Northern Cape and the Free State. The species is not considered to be threatened in its habitat early in the twenty first century (www.plantzafrica.com; http://redlist.sanbi.org).