Home » TYPES » Parasites » Agelanthus natalitius subsp. zeyheri
Back to Category Overview
Total images in all categories: 12,061
Total number of hits on all images: 7,359,858 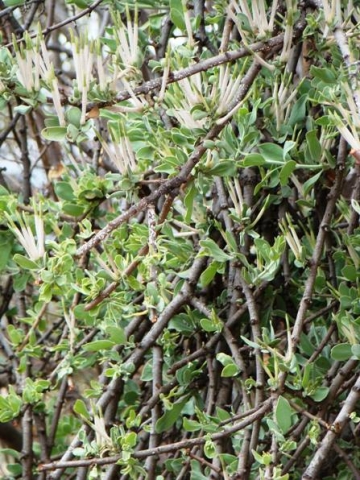 The conspicuous flowers grow in clusters of two to five on short side-branchlets. The narrowly cylindrical flower is about 6 cm long with a swollen base, split tube and erect lobes. It is white with yellow-green throat and some red. It is smooth or hairy and faintly scented. Flowering happens from before midspring to after midsummer.

The plant or part tree can be beautiful and interesting in itself. While the birdlime bush sometimes kills off host trees and might be removed from cherished garden trees, they might also be left alone as part of nature! Nothing lives forever, death being as natural as life.

The subspecies distribution is in the north of South Africa, in Limpopo, Mpumalanga, Gauteng, North West and KwaZulu-Natal. It is not considered to be threatened in its habitat early in the twenty first century (Pooley, 1998; Germishuizen and Fabian, 1982; http://redlist.sanbi.org).