Home » TYPES » Parasites » Striga elegans
Back to Category Overview
Total images in all categories: 10,526
Total number of hits on all images: 5,178,785 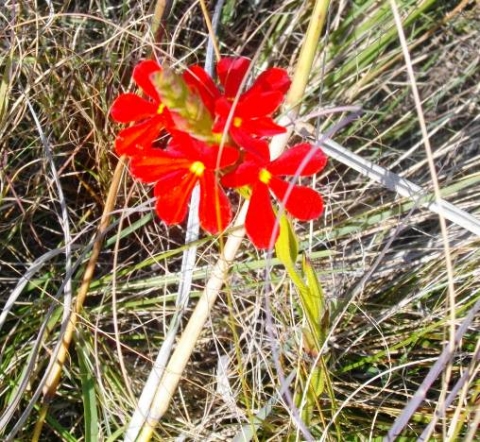 Striga elegans, commonly known as large witchweed, is a slender, erect herb that rarely branches, growing to 20 cm in height. The leaves are stiff, positioned alternately and erectly next to the stem. Leaf texture is rough due to tiny hairs that are slightly inflated at the base.

The brightly scarlet corolla is two-lipped; the upper lip two-lobed, a little shorter than the three-lobed lower one. The corolla lobes have rounded tips; the throat of the flower is yellow. The calyx has about ten prominent veins. Flowering occurs from late spring to autumn.

S. elegans can only germinate and survive its early development stage when attached to a living host plant, but may later survive if the host dies.

This species occurs widespread in the eastern parts of South Africa on many wild grasses, only occasionally on maize. The plant is found in open grassland at various altitudes. The species is not considered to be threatened in its habitat early in the twenty first century.

African subsistence farmers are mostly unable to afford measures to combat the several other Striga species infestation of their crops like maize, sorghum or sugar cane. Such infestations occur on about 40 million hectares of cultivated land in Sub-Saharan Africa, causing annual losses exceeding $13 billion (US). Many such farmers do not have the option of relocating their planting to fields yet unaffected by these pathogenic plants (Van Wyk and Malan, 1997; Onderstall, 1984; Wikipedia; http://redlist.sanbi.org).