Home » TYPES » Parasites » Sopubia cana var. cana
Back to Category Overview
Total images in all categories: 11,506
Total number of hits on all images: 6,494,360 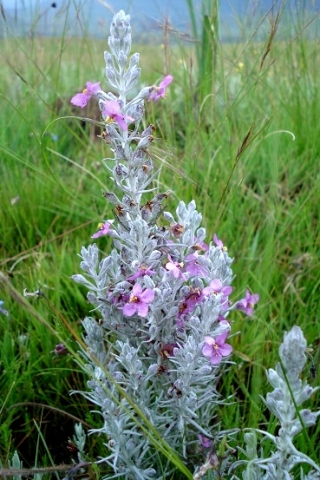 Sopubia cana var. cana, the silver sopubia, is a hemiparasitic herb with a woody base. The plant grows wand-like stems, erect and whitish hairy to heights around 45 cm. The leaves are linear to narrowly lanceolate and grey with a dense covering of felted hairs. There are no leaf stalks and the leaf margins are entire.

The pink or purple flowers grow in racemes from leaf axils. The calyx is five-lobed and hairy. The five rounded, spreading petals are delicately veined. The flowers have dark centres in the mouths of the short corolla tubes. The four yellow stamens protrude from the flower centres. One lobe on every anther is undeveloped and small, being sterile. The fruit is a small capsule, the size of the calyx.

The variety is found widespread in the eastern grassland of South Africa and to the north in tropical Africa. This plant was found flowering in January at Qacha’s Nek. The variety is not considered to be threatened in its habitat early in the twenty first century (Manning, 2009; JSTOR).