Home » TYPES » Parasites » Colpoon compressum
Back to Category Overview
Total images in all categories: 12,061
Total number of hits on all images: 7,359,938 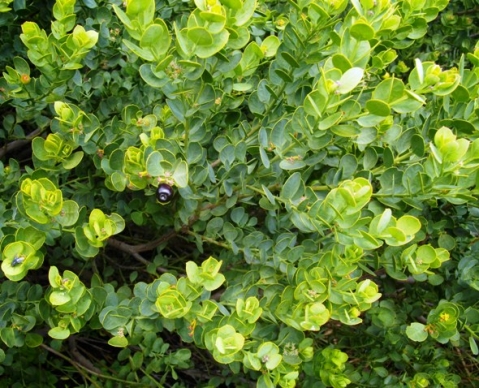 Previous
Image 7 of 57
Next

Colpoon compressum, the Cape sumach or coastal tannin bush, used to be known botanically as Osyris compressa. In Afrikaans it has several names, including pruimbas (plum bark) and bergbas (mountain bark). The plant is placed in the Parasites Album because it is a hemiparasitic plant, i.e. it photosynthesises its own food, but augments intake by also parasitising on other plants via attaching to their roots.

The leaves are opposite, elliptic with a small tip, leathery, blue-green in colour and covered in a greyish bloom. The small, yellow-green flowers may be single-sexed on a plant or have both male and female flowers on the same plant. It fruits almost all the year round, but less so in late summer and autumn. The berries are much eaten by birds.

The distribution is large and diverse. The plant is found along the coast from the Cape to northern KwaZulu-Natal. Consider the elaborate survival kit of this plant that provides for several contingencies: the leaf adaptation to conserve moisture, the long flowering season, the variable hermaphroditic feature, the hemiparasitic backup resource, the multiple pollinator species all contribute. These and more factors enhance survival probability in fynbos, savannah, montane and coastal conditions (www.plantzafrica.com).