Home » TYPES » Parasites » Orobanche ramosa
Back to Category Overview
Total images in all categories: 11,506
Total number of hits on all images: 6,491,708 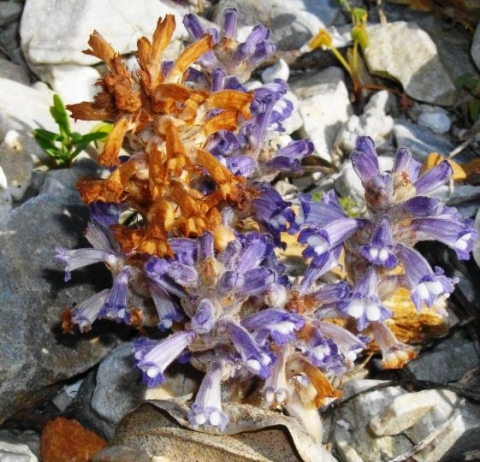 Orobanche ramosa is a parasite that attaches itself underground to the roots of other plants. It then drains nutrients from these hosts, not possessing leaves containing chlorophyll itself.

The generic name, Orobanche, is derived from the Greek words orobos meaning vetch (a genus of herbaceous, twining, leguminous plants) and ancho meaning to strangle or to throttle, referring to the hold Orobanche plants have on their hosts. Orobanche, Striga and other genera that do not have any chlorophyll are called holoparasites. Some Orobanche species are annual, others biennial or perennial.

This plant is originally from North Africa, Europe and possibly Asia, having spontaneously spread ever more widely and somehow reaching South Africa.

In several parts of the world certain species of this genus, commonly known as broomrape or hemp broomrape have become agricultural pests, infesting crops like tomato, potato, tobacco and ornamental plants. It then understandably appears on several official lists of noxious or prohibited weeds combated in various parts of the world.

The name originates from the Greek words orobus meaning vetch (certain kinds of herbal plants) and anchein meaning to strangle. The plant may eventually strangle its host by depriving it of nutrients (Andrew, 2017; Wikipedia; http://plants.usda.gov; http://fernkloof.com).