Home » TYPES » Parasites » Moquiniella rubra buds and flowers
Back to Category Overview
Total images in all categories: 11,506
Total number of hits on all images: 6,483,581 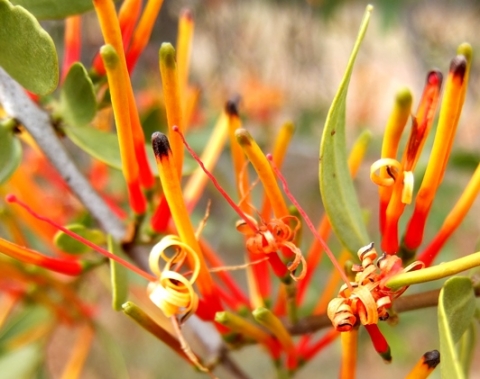 In this photo of Moquiniella rubra taken near Oudtshoorn, the matchstick likeness that brought about the Afrikaans common name of vuurhoutjies for this plant is clear to see.

Once the bud is ready to open, its tip turns black, resembling a used match. This is a signal understood by the pollinators of the species. The slightest touch makes the corolla lobes or perianth segments open explosively, spraying pollen upon the culprit or victim requesting entry.

The pollinator is of a sudden fully prepared for its task, i.e. to redistribute its load onto other stigmas of flowers of the same species. The stamens arise from near the base of the five corolla lobes or segments. The anthers usually break off from the filaments during the explosive flower opening.

Green-tipped buds with yellow bodies and a red section near the base are not yet ready to open. Open flowers have their perianth segments recurving in the yellow section, the red basal part remaining intact, does not split.