Home » TYPES » Parasites » Moquiniella rubra
Back to Category Overview
Total images in all categories: 12,061
Total number of hits on all images: 7,360,067 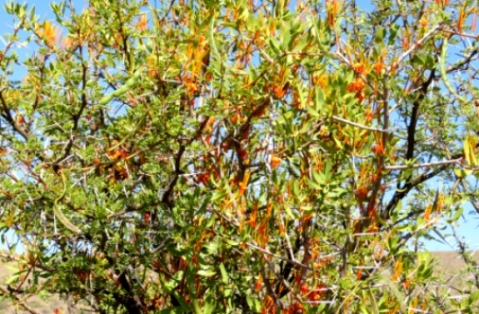 Moquiniella rubra was previously known as Loranthus elegans and is commonly known as lighted candles mistletoe or in Afrikaans as vuurhoutjies (matchsticks) or vuurhoutjievoëlent (matchstick birdlime). This plant is a woody, aerial hemiparasite, i.e. a plant which obtains or may obtain part of its food by parasitism, but has green leaves and also photosynthesises.

M. rubra reaches 1 m in diameter from one growth point in a tree. The plant grows on branches of several tree species, in picture invading much of the crown of a Vachellia karroo tree near Oudtshoorn. Along the west coast of South Africa M. rubra is often seen on Searsia undulata shrubs.

The species distribution is widespread in the Western Cape, the western parts of the Eastern Cape and coastal in the Northern Cape through Namaqualand and the Richtersveld. It also grows in Namibia.

The plant is often found in veld with spekboom and guarri. This plant is not considered to be threatened in its habitat early in the twenty first century.