Home » TYPES » Parasites » Moquiniella rubra open flower
Back to Category Overview
Total images in all categories: 11,506
Total number of hits on all images: 6,491,825 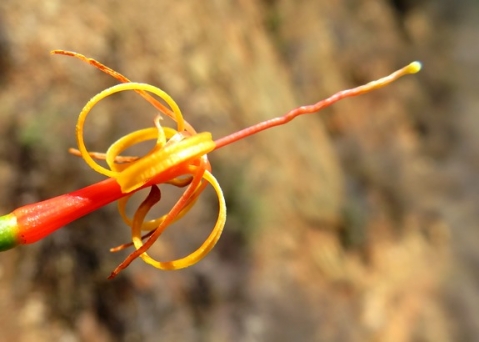 The open Moquiniella rubra flower has its corolla lobes or perianth segments split and curled back to near the base of the flower. These flower segments or lobes are grooved on the inside and yellow, the outside surface having retained its orange colour here.

The almost straight style (except for a few zigzags mainly near the centre) protrudes far, pointing its rounded stigma, here yellow, like the tip of a foil or épée as in fencing.

Some straight, pale brownish filaments of used stamens angle downwards from their points of attachment on the inner surfaces of the recurved lobes. They emerge some distance up from the corolla base. There are no anthers on these filaments, all lost in the big bang of the flower bud bursting open.

The floral structure of M. rubra resembles that of the Proteaceae family, although each floret grows separately in the case of the former. They do not form one enclosed multitude of small florets closely together as a flowerhead inside an involucre, which would make them protea (Vlok and Schutte-Vlok, 2010; Leistner, (Ed.), 2000).