Home » TYPES » Parasites » Harveya speciosa
Back to Category Overview
Total images in all categories: 8,988
Total number of hits on all images: 3,989,681 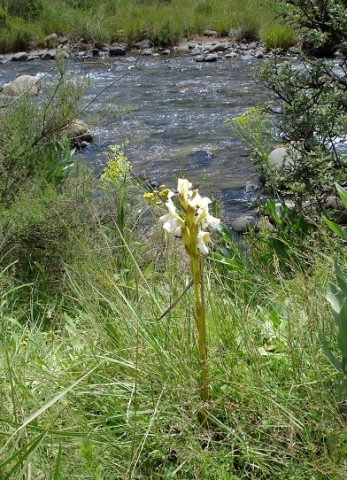 Harveya speciosa, the large white inkflower, is a fleshy parasitic herb that grows to heights around 1 m. The leaves are scale-like, lacking chlorophyll and thus dependent upon alternative sources of nutrition to produce seed. Parasitising on the roots of grasses or shrubby daisies solves this problem.

The plant turns black when becoming dry. Ingenious early colonists discovered that writing ink could be made from the sap found in these plants, earning Harveya plants the name inkflower.

The species distribution is in the eastern parts of South Africa, from the Eastern Cape to Limpopo, as well as the Free State and Gauteng. It also grows in Lesotho, Swaziland and Mozambique.

The habitat is mainly montane grassland receiving its rain in summer and damp thickets. The species is not considered to be threatened in its habitat early in the twenty first century (Manning, 2009; http://redlist.sanbi.org).