Home » TYPES » Parasites » Harveya scarlatina
Back to Category Overview
Total images in all categories: 9,570
Total number of hits on all images: 4,300,227 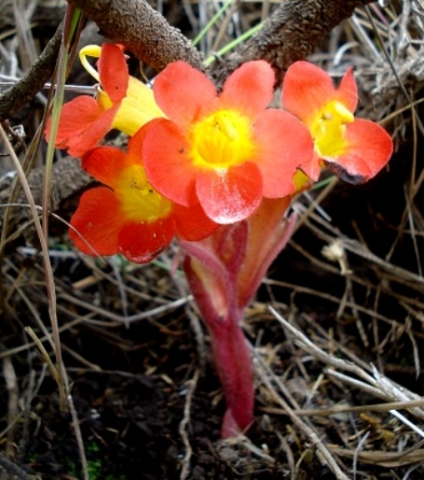 Harveya scarlatina is a parasitic herb that branches a little and is covered in minute hairs. It grows erectly, reaching heights around 15 cm. The leaves are opposite and stalkless on the furrowed stems. Leaves are scale-like, elliptic or ovate in shape. Lower leaves are smaller and imbricate, overlapping each other like roof tiles.

A dense spike of two to six trumpet-shaped, orange and red flowers with yellow throats is produced during a brief flowering season from midsummer. The corolla tube is about 2 cm long, the corolla lobes vary in shape from oblong to round. The stigma is exserted beyond the corolla mouth. The calyx is five-lobed as the corolla, purplish red and slightly hairy.

The distribution of the species is in the southern Drakensberg in KwaZulu-Natal and the Eastern Cape, as well as in Lesotho. It may also occur in the eastern Free State. This plant was photographed in Lesotho during January.

The habitat is grassland and scrub at higher elevations. The species is not considered to be threatened in its habitat early in the twenty first century (Manning, 2009; JSTOR; iSpot; http://redlist.sanbi.org).