Home » TYPES » Parasites » Harveya capensis
Back to Category Overview
Total images in all categories: 9,166
Total number of hits on all images: 4,093,088 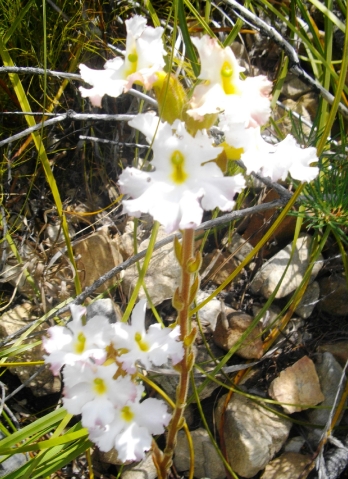 The Harveya genus, commonly known as inkflowers, comprises annual and perennial root parasite plants. Harveya leaves are just scales, often yellow and lacking chlorophyll. This makes them dependent on host plants approached via unsolicited root attachments; an intrusive, underground form of groping. The host is compelled to share its nutrients, not bear its children.

Nine of the 35 Harveya species grow among the fynbos. The genus forms part of the Orobanchaceae or broomrape family that includes several other parasitic genera. They used to be classified with the Scrophulariaceae.

Tiny inkflower seeds germinate underground, having been washed there by rainwater through the loose sandy soil of the plant's habitat. For the new life to continue, this event has to occur near a living root of almost any shrubby species, promptly imposed upon through a durable attachment for appropriating some of the host plant’s life-giving resources. A little like siphoning fuel from a parked car, but the link becomes durable, lifelong, being underground!

All life forms impose in some way upon other living entities for survival, be they plant, animal or through cannibalistic practices. This universal natural pattern forms the base of societal practices among humans for drawing support from compatriots. Where such assumed rights are exercised for long enough, they grow to constitutional proportions, appearing like the natural order. Civilisation builds legal, ethical and emotional systems for sanitising social parasitism, one cause of the excessive growth in human population.