Home » TYPES » Parasites » Cytinus sanguineus
Back to Category Overview
Total images in all categories: 11,018
Total number of hits on all images: 5,653,243 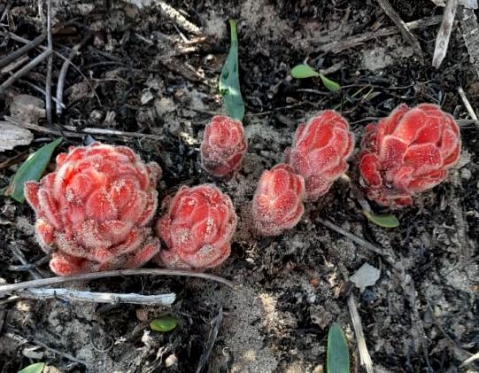 Cytinus sanguineus, commonly known as the scarlet vampirecup and in Afrikaans as the aardroos (earth rose), is a leafless, dwarf root parasite, a holoparasite. Holoparasitic organisms are not capable of photosynthesis at all and obtain all nutrients and water from a host plant, as in the case of dodder. Partial parasites are called hemiparasites, i.e. plants that obtain or may obtain parts of their food by parasitism, like mistletoe, capable of photosynthesis.

So, C. sanguineus lacks chlorophyll completely. It has no roots but grows fleshy stems that attach to host plant roots. It is not picky as to host plant identity. In picture, several red rosettes of bracts emerge directly from the ground. Some other plant's root must be passing nearby, underground.

Male and female flowers appear separately in their own rosettes on different plants. The bracts may be orange or purple, apart from the blood-red or scarlet indicated in the names. The cup-shaped to funnel-shaped flowers are hairy. The staminal column of the male flower protrudes above the corolla, simplifying the process of sexing these plants. Flowering happens from winter to midspring.

The species distribution is mainly in the Western Cape, in the west of the Northern Cape and slightly into the Eastern Cape.

The plants grow on sandy flats, slopes and plateaus in the open or under vegetation. The species is not considered to be threatened in its habitat early in the twenty first century.

Previously classified under Rafflesiaceae, C. sanguineus was in 2009 moved to its new Cytinaceae family in the order Malvales. The family comprises two genera, Cytinus and Bdallophytum totalling ten species.

Two more Cytinus species grow in South Africa: the critically endangered C. capensis only occurring in the Cape Peninsula and C. visseri found in Limpopo and Mpumalanga, a plant in survival terms of least concern. There are about seven Cytinus species more, growing in Africa, Madagascar and the Mediterranean region.