Home » TYPES » Parasites » Cassytha ciliolata bearing berries
Back to Category Overview
Total images in all categories: 11,901
Total number of hits on all images: 7,142,077 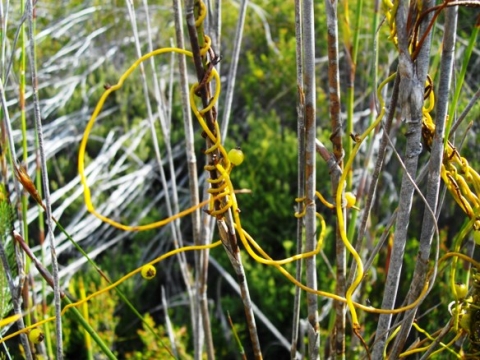 Previous
Image 5 of 57
Next

Devil’s sewing thread is one of the sinister plant names imposed on a parasite in the past. The idea of a plant living off nutrients obtained from another plant, (the word parasite has Greek origins, meaning to eat at another’s table), suggests something abnormal or improper to people abhorring cannibalism these days. Why should plants not eat plants if animals eat animals?

Nature has an almost endless range of adaptive solutions, developed in evolutionary diversity. It produces solutions for survival challenges, even if some plants fail to 'stand on their own feet' as it were. All living species are so fully dependent on others around them, that the parasite tag is really a misnomer. The brazen manner in which a parasite's dependence is established warrants singling out. A parasite may well disrupt the metabolism of a host plant and hasten its death.

There is no ethical code, no right and wrong in the plant world, nor in the animal world for that matter. Only people impose such arrangements, so far only for their own species, commonly for other people with less wit or power. For plants life is a no holds barred survival struggle, every species for itself, all the time. If a species finishes off its resources or kills its last supplier, annihilation of the species itself becomes inevitable. People may be involved in such a downward spiral.

Inducing co-evolutionary responses in supplier species through long-standing games of chance have been ongoing for almost as long as there has been life on earth. The dead serious games are played via selectivity in the opportunities for procreation. Many die young as food for predators in order for the few to find the predators sated, so they can procreate in peace, again providing for a more than healthy, expendable surplus. The surplus produced also serves to allow the inevitable individual differences in offspring to bring about a bias of "the right kind" in the surviving mix. Natural selection can't be done in small sample statistics.

Insects that evolve fitting nectar imbibing mouths in tandem with suitable flower shapes evolving in target plants, is one such phenomenon. Such chance event patterns in nature resemble the outcome of protracted card games. Only in nature there is absence of thought or conscious choice, while many deaths shape the outcome for each species.

The one species endowed with a survival facility in the form of a brain capable of abstract thinking has the special gift of really enjoying the complexity in all life. It is possible to use the brain for living interdependently among the other living entities. It is already pretty clear that they all need each other.

The risk of misunderstanding or delusions of grandeur in a brain is of course always there: To tinker with the bubble of life around the moving vehicle earth while riding on it. But the better mechanics are usually not that dumb.