Home » TYPES » Parasites » Alectra basutica
Back to Category Overview
Total images in all categories: 12,087
Total number of hits on all images: 7,392,972 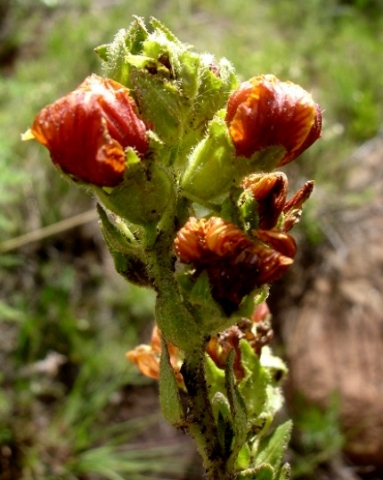 Previous
Image 3 of 57
Next

The plant grows a few erect, purple and hairy stems. The soft, hairy leaves are sessile, opposite and ovate. Leaf margins are entire and wavy. Leaf colour is fresh to pale green, sometimes with purple on the margins and near the tips; enough green to do some of its own photosynthesis.

The flowers seen here are all closed, the petals folded in; only the orange outer petal surfaces visible. The flowers grow in spikes, do not have pedicels. Large, pointed, leaf-like sepals envelop the corolla at the base. When the flower opens into a wide cup, the beige-yellow inner petal surfaces become visible, showing three parallel veins to their tips. The petals are broadly obovate with rounded, wavy tips. Four stamens cohere in pairs low in the wide flower base.

It grows in KwaZulu-Natal, the Free State and Lesotho in montane grassland. This plant was seen during January in the east of Lesotho. The species is not considered to be threatened in its habitat early in the twenty first century (http://redlist.sanbi.org).