Home » TYPES » Orchids » Vanilla roscheri
Back to Category Overview
Total images in all categories: 11,104
Total number of hits on all images: 5,772,796 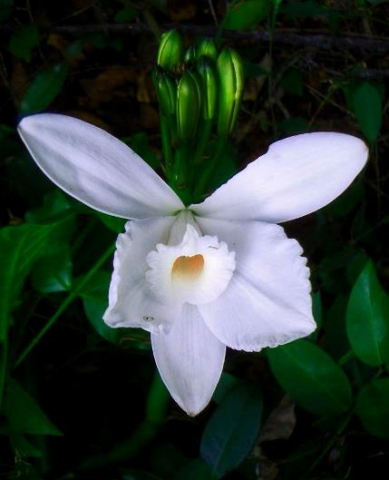 Vanilla roscheri is an orchid growing succulent liana stems with two shallow channels at opposite sides. Vanilla is the only orchid genus in Africa that has a liana habit. Roots grow from the stem nodes, clasping vegetation or drawing nutrients from the soil where it is touched.

There are no green leaves, only vestigial ones. They are brown and membranous, about 3 cm long.

Inflorescences appear terminally or from leaf axils on peduncles up to 20 cm long. Each produces up to 35 creamy white flowers. The three sepals visible at the back of the flower have straight margins tapering to acutely pointed tips. The pair of lateral petals have wavy, incurved margins while the lip is broad, coiled into a wide tube or cup with broad rim and sometimes salmon coloured inside.

The species is common in East Africa from Kenya to Mozambique, rare in South Africa, only near Lake Sibaya in Maputaland, northern KwaZulu-Natal.

The habitat is coastal bush, mangrove and other forests where the plants scramble into thicket, sometimes grassy fields with scattered trees and even growing on coral rocks. The plants are found at elevations from sea level to 100 m. Although the population is stable, the species presence in South Africa at the extreme south of its distribution is deemed near threatened early in the twenty first century.