Home » TYPES » Orchids » Tridactyle bicaudata
Back to Category Overview
Total images in all categories: 11,792
Total number of hits on all images: 6,949,135 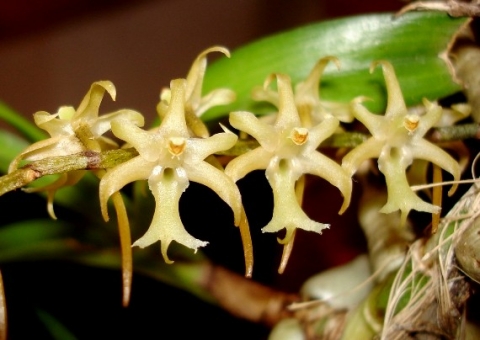 Tridactyle bicaudata is an epiphyte, a perennial orchid that grows large clumps to heights around 25 cm. It is rarely terrestrial. The roots are grey and rough, equipped with surface cells that readily absorb moisture. The stems are erect or pendulous, losing their old leaves in the lower parts. The fleshy or thin leaves grow in two rows, becoming 6 cm to 12 cm long and 1 cm to 1,5 cm wide.

The species distribution is coastal in South Africa, while up to 2500 m in tropical Africa where the cold doesn’t reach. It ranges from the southern Cape and Eastern Cape coast through KwaZulu-Natal and Swaziland to west and north Africa. The plants grow in dry forest on rocks and trees.

There are two subspecies, viz. subsp. rupestris with fleshy leaves that grows in full sun on rocks and subsp. bicaudata with thin leaves that grows in shade hanging from branches. Subsp. bicaudata is the widespread one of Africa; subsp. rupestris is a South African endemic confined to two coastal areas in the southern Cape and the south of KwaZulu-Natal, spilling over into the Eastern Cape.

Neither subspecies is considered to be threatened in its respective habitat early in the twenty first century (Pooley, 1998; www.orchidspecies.com; www.redlist.sanbi.org).