Home » TYPES » Orchids » Stenoglottis zambesiaca
Back to Category Overview
Total images in all categories: 11,792
Total number of hits on all images: 6,949,323 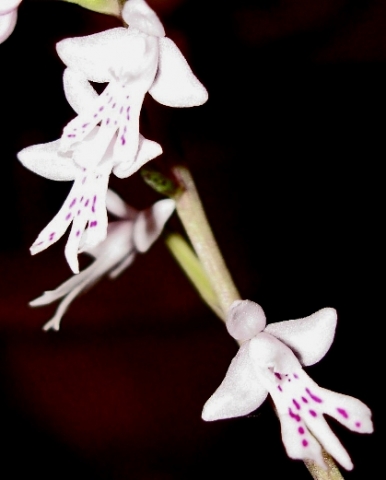 Its basal rosette of spreading to arched, lanceolate leaves may have spots and wavy margins as do S. fimbriata, a close relative. Small, spaced and pointed leaves, also lightly spotted, sheathe the scape up to the inflorescence where they continue as small bracts under each flower ovary.

The South African species distribution is confined to parts of KwaZulu-Natal and Limpopo, but the plant is more widespread in tropical Africa from Zimbabwe and Mozambique to Tanzania and Malawi.

The plants grow in shade on lower, forested slopes. They are found on tree trunks, mossy rocks and leafy or log detritus, sometimes also in woodland. The species is not considered to be threatened in its habitat early in the twenty first century (www.zimbabweflora.co.zw; http://apps.kew.org; www.redlist.sanbi.org).