Home » TYPES » Orchids » Stenoglottis longifolia
Back to Category Overview
Total images in all categories: 11,792
Total number of hits on all images: 6,949,305 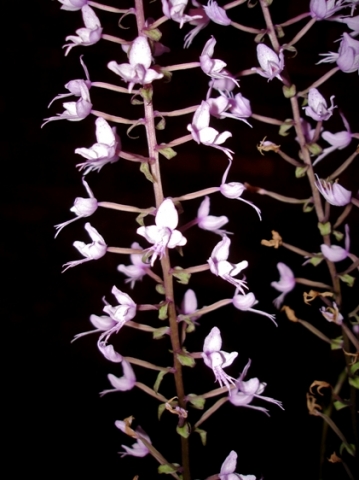 Stenoglottis longifolia, the long-leafed stenoglottis, is a medium-sized to large and robust perennial, a ground orchid, but also an epiphyte and a lithophyte. The plant has a cluster of fleshy roots.

Numerous unspotted leaves are grown in a basal rosette, recurving slightly near their tips. The leaf shape is lanceolate to narrowly oblong, the tips acutely pointed. Leaf dimensions are 9 cm to 25 cm long and 1 cm to 4 cm wide; their length brought the specific name. The leaf surfaces are pale green, their margins wavy. A few scattered leaf sheaths are found up the scape as well.

Many pale, rosy lilac or white flowers are produced in an erect raceme of up to 35 cm long. Purple spots may occur upon all perianth segments. The spurless lip of the resupinate flower is five-lobed in its upper third, the lobes narrow and pointing forward. The pollinia are large and erect, enclosed in sacs on the face of the column. The pointed bracts are always shorter than the ovaries. Flower diameter is about 1,2 cm. Flowering happens in late autumn and early winter.

The species distribution is in the east of South Africa from the Eastern Province through KwaZulu-Natal to Mpumalanga and Limpopo, the plant a South African endemic. The habitat is humus rich soil, leaf detritus, rocky outcrops or tree stems, occurring at elevations from 300 m to 1300 m. The species is not considered to be threatened in its habitat early in the twenty first century.

This is a similar species to S. fimbriata, but is much more robust (Pooley, 1998; www.orchidspecies.com; www.redlist.sanbi.org).