Home » TYPES » Orchids » Stenoglottis fimbriata
Back to Category Overview
Total images in all categories: 11,905
Total number of hits on all images: 7,155,730 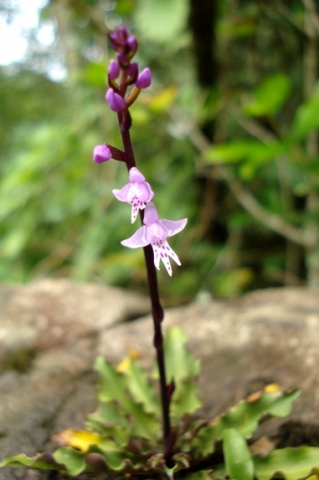 Stenoglottis fimbriata, the fringed stenoglottis, is an epiphytic or lithophytic orchid, a slender perennial growing a purple flower stem to heights from 10 cm to 40 cm. The many succulent tuberous roots are hair-like, attaching to surfaces upon which the plant happens to grow.

The species distribution is widespread along the eastern parts of South Africa from the Eastern Cape to Limpopo. It also grows in Lesotho, Swaziland and in tropical Africa to Tanzania.

In habitat the plant grows at levels close to the ground in shade on moss, rocks and trees in forests from the coast to 1925 m. The species is not considered to be threatened in its habitat early in the twenty first century (Pooley, 1998; Germishuizen and Fabian, 1982; www.redlist.sanbi.org).