Home » TYPES » Orchids » Pterostylis nutans or nodding greenhood, an Australian
Back to Category Overview
Total images in all categories: 11,662
Total number of hits on all images: 6,774,628 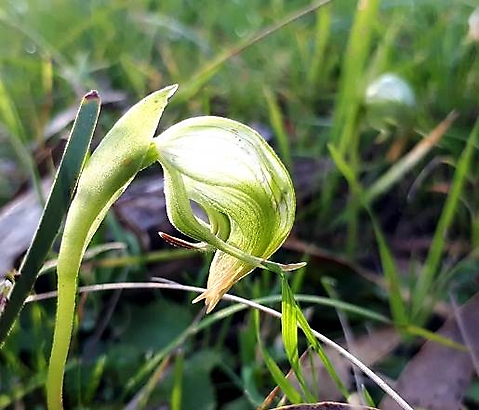 This item adds a bit of foreign flavour! It is an Australian orchid found in great numbers on some roadsides on the outskirts of Melbourne, noticed in July during Covid-19 lockdown.

This growth consists of three to six ovate leaves, about 9 cm long, grown in a basal rosette and an erect stem bearing a green, pendulous, hooded flower, about 2,5 cm long. The hood or biggest part of the visible flower comprises the upper three tepals of the resupinate (twisted around) corolla. They are the dorsal tepal and the pair of lateral petals bending protectively or modestly over the male and female floral parts, concealing them. The specific name, nutans, is derived from the Latin verb nutare meaning to nod, referring to this orientation of the hood.

Beside the hood, the narrow, lateral sepals curve up conspicuously, their tips passing it. There is a sheathing bract over the ovary at the back. Flowering happens in winter to after midspring.

The habitat is damp, undisturbed areas in rainforest, eucalypt forest and scrubland.

Apart from setting seed, the plants tend to form colonies from vegetative propagation of small new tubers adjacent to the main one. The dehiscent greenhood fruit capsules add solid contributions as well: in some species about 500 seeds may be released from one ripe capsule. Some of these plants are grown commercially and information about how to do this is freely available on the Internet (Wikipedia; www.oznativeplants.com; www.nurseriesonline.com.au).