Home » TYPES » Orchids » Nervilia crociformis
Back to Category Overview
Total images in all categories: 11,523
Total number of hits on all images: 6,599,387 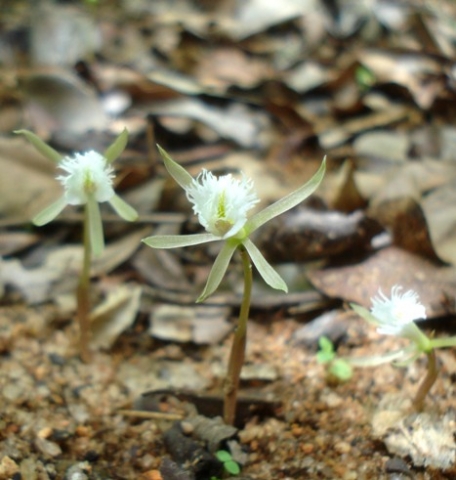 Nervilia crociformis is a small terrestrial orchid growing from an ovoid tuber to 10 cm in height. At least five of the about 60 species of Nervilia occur in southern Africa, all in the north-easterly parts. N. crociformis used to be called Bolborchis crociformis in the past

It annually grows just one basal leaf, on or near the ground, once it has flowered. The leaf shape is rounded with conspicuous lobes at the base, to nearly kidney-shaped. Straight, evenly space veins, recessed on the upper surface of the leaf, radiate to the margin. Leaves may be hairy or not. The generic name, Nervilia, is derived from the Latin word nervus meaning vein, referring to the distinct, fine leaf veins.

The species distribution is in Mpumalanga, Swaziland and Zimbabwe. This plant is not considered to be threatened in its habitat early in the twenty first century (www.africanorchids.dk; Wikipedia; www.redlist.sanbi.org).