Home » TYPES » Orchids » Nervilia crociformis, its all in the lip
Back to Category Overview
Total images in all categories: 11,662
Total number of hits on all images: 6,774,643 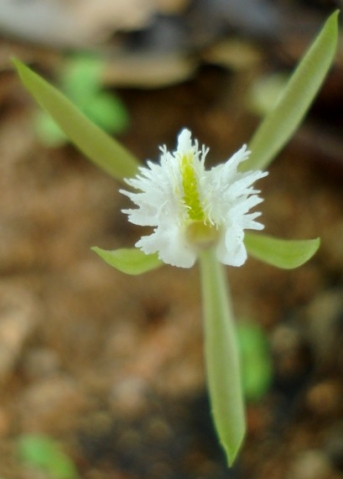 The fragrant flower of Nervilia crociformis grows solitary on a fleshy, erect flower scape that is terete in shape, i.e. narrowly cylindrical.

The sepals, dull green here, are comparatively inconspicuous, narrowly oblong and tapering to acutely pointed tips. The two lateral petals, pointing inwards rather than spreading as the sepals, resemble the three larger sepals in colour and shape.

The lip, pointing up, is the prime flower feature. Obscurely three-lobed, it has irregularly shaped, raggedly pointed or forked fleshy outgrowths on its surface and margins. Even bigger ones grow in three vertical rows on the central lip lobe. A vertical yellow band among these papillae is visible on the lip.