Home » TYPES » Orchids » Neobolusia tysonii
Back to Category Overview
Total images in all categories: 11,789
Total number of hits on all images: 6,937,127 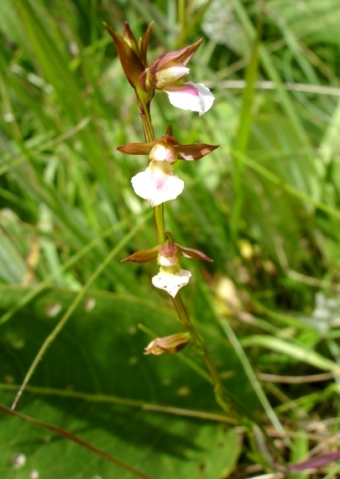 Neobolusia tysonii is a slender terrestrial orchid annually growing to about 45 cm from a soft, ovoid perennial tuber.

The plant grows two basal leaves near the ground, 8 cm long and 2 cm wide. There are also a few small stem leaves, widely spaced, grading into bracts among the flowers.

The species is distributed in the east of South Africa, from the Eastern Cape through KwaZulu-Natal and the eastern Free State to Mpumalanga and Limpopo. The plant is also found in Lesotho and Swaziland. The habitat is moist to marshy grassland at elevations from 1200 m to 2350 m. The species is not considered to be threatened in its habitat early in the twenty first century (Pooley, 1998; www.africanorchids.dk; www.redlist.sanbi.org).