Home » TYPES » Orchids » Mystacidium gracile
Back to Category Overview
Total images in all categories: 12,082
Total number of hits on all images: 7,379,607 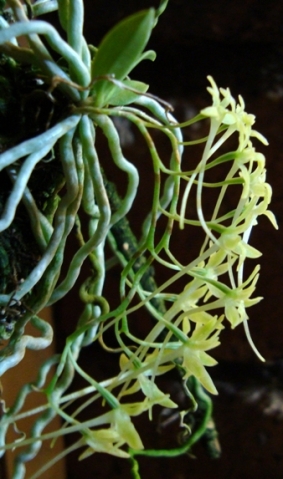 Mystacidium gracile is a small epiphytic orchid perched on large branches of trees. It bears a mass of fine, blue-green roots. The plants are usually leafless, although one or two narrow leaves, 2 cm long by 3 mm wide may be seen, as in the plant depicted. Its individual flowers curve up.

The species distribution is from the Eastern Cape and KwaZulu-Natal to Mpumalanga and Limpopo. It also grows in Zimbabwe and on Madagascar.

The habitat is temperate inland forests to elevations around 1900 m. The species is not considered to be threatened in its habitat early in the twenty first century (Pooley, 1998; www.orchidspecies.com; www.africanorchids.dk; www.redlist.sanbi.org).