Home » TYPES » Orchids » Mystacidium flanaganii flower
Back to Category Overview
Total images in all categories: 12,068
Total number of hits on all images: 7,363,111 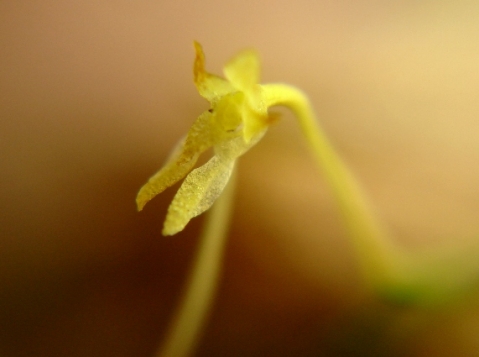 The flowers of Mystacidium flanaganii are grown in one or two lax, pendulous inflorescences of about 6 cm long. There are five to ten small flowers in a spike, flower diameter about 1 cm.

Flower colour is pale yellow to greenish. The dorsal sepal and petals are small, measuring 2 mm by 1 mm. The lateral sepals pointing down in the photo are longer, up to 4 mm, obliquely lance-shaped from narrow bases. The lip is 2 mm long, lance-shaped with an acutely pointed tip. The long, slender spur, up to 3 cm in length, tapers from a wide mouth.

Flowering happens in spring to early autumn and again from late autumn to early winter.

Mystacidium is a genus of ten species found along the east of Africa from Tanzania to the Eastern Cape. It is anticipated that the genus might be expanded to include more plants of similar phylogenetic origin, following studies expected to be confirmatory.

Mystax is the Greek for moustache, referring to the small, bearded rostellum lobes typically found in flowers of the genus (Pooley, 1998; Liltved and Johnson, 2012; www.africanorchids.dk).