Home » TYPES » Orchids » Mystacidium capense
Back to Category Overview
Total images in all categories: 12,068
Total number of hits on all images: 7,360,613 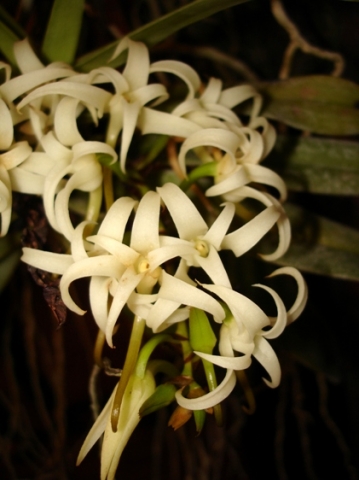 Mystacidium capense is a dwarf epiphytic orchid that grows to 8 cm in height. Its roots are sometimes disproportionately long, pale grey in colour and covered in scattered white dots.

The sheathed leaves are long, obovate to oblanceolate and bilobed, stiff and flat. The four to ten leaves become from 3 to 13 cm long and 1 cm to 1,5 cm wide, borne in one plane.

Flowering comes in two to four hanging inflorescences, up to 10 cm long. From six to fourteen flowers are spaced in each lax spike, a flower around 2,3 cm in diameter.

The cream sepals, nearly oblong but for slight tapering, are larger than the lateral petals. These petals, similarly coloured and shaped, angle up in the gap between the dorsal and lateral sepals. The lip is longer than the petals, similarly coloured and narrow. All the floral segments recurve. Below the lip the pale green to brown spur is long, cylindrical and curving, usually backwards.

The species is distributed in the east of South Africa from the Western and Eastern Cape to Limpopo and Swaziland.

The habitat is shady woodland, particularly thornveld, as well as seasonal watercourses and coastal scrub in hot, dry to humid conditions, the plants perching on trees and rocks. The species is not considered to be threatened in its habitat early in the twenty first century (Pooley, 1998; www.redlist.sanbi.org).