Home » TYPES » Orchids » Microcoelia exilis
Back to Category Overview
Total images in all categories: 12,091
Total number of hits on all images: 7,393,140 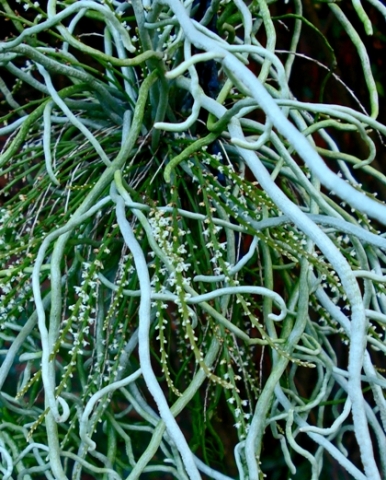 Microcoelia exilis, the pinhead orchid, is a leafless epiphyte, a perennial herb that grows a tangled mass of roots and stems spreading to about 40 cm in diameter. An epiphyte is a plant that grows harmlessly upon another plant, deriving its moisture and nutrients from the air, rain and sometimes from debris accumulating around it; therefore not a parasite.

The species distribution is in KwaZulu-Natal, tropical Africa as far as the DRC and Kenya, as well as on some Indian Ocean islands. The habitat is hot dry forests and thickets from low elevations to 1800 m. The plant is typically found on smaller branches of trees. The species is not considered to be threatened in its habitat early in the twenty first century.

M. exilis was in the past classified in both the orchid genera of Angraecum and Mystacidium. The Microcoelia genus comprises about 31 species in Sub-Saharan Africa and nearby islands, mainly Madagascar. The plant resembles Mystacidium gracile (Pooley, 1998; www.zimbabweflora.co.zw; www.redlist.sanbi.org).