Home » TYPES » Orchids » Liparis bowkeri
Back to Category Overview
Total images in all categories: 11,923
Total number of hits on all images: 7,173,549 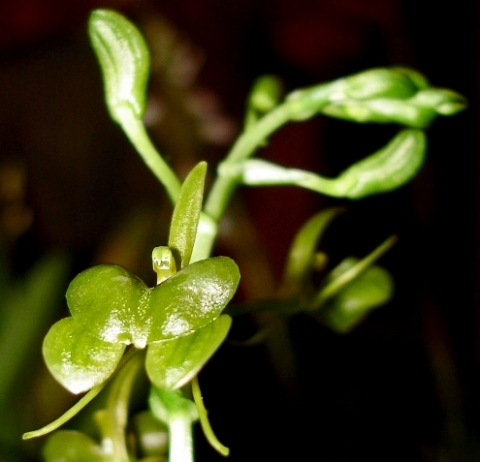 Liparis bowkeri is either terrestrial or a low-level epiphytic, a perennial herb growing to only 15 cm. It used to be called L. neglecta.

A slender, lax inflorescence of four to twelve flowers subtended by small bracts is borne from late spring to early autumn. The photo was taken in November. The flower colour is a translucent green, yellowish green or yellow, fading to orange or brown. Flowers become about 2 cm wide.

The buds above the open flower seem contorted, as if in agony. The ones already separated from the apical cluster are probably starting the resupination process, the twisting around of the flower that starts off with lip at the top, resulting in presenting it at the bottom of open flowers.

The generic name, Liparis, is derived from the Greek word, liparos meaning oily, referring to the smooth, glossy appearance of the flowers of some of the species. As for the specific name, Bowker was the maiden name of Mary Barber, who arrived in South Africa as a two-year-old with her 1820 Settler family, later to become a noted naturalist, writer and painter.

The species distribution is widespread in the eastern parts of South Africa from the Eastern Cape and KwaZulu-Natal at higher altitudes to the provinces north of the Vaal River, but not recorded in Gauteng. The distribution extends into tropical Africa as far as Kenya, the DRC and Burundi.

The L. bowkeri habitat is evergreen forest or woodland in high rainfall areas, where the plants grow on forest floors, rocks and trees, mostly in leaf litter and moss. The species is not considered to be threatened in its habitat early in the twenty first century (Pooley, 1998; Onderstall, 1984; www.africanorchids.dk; www.redlist.sanbi.org).