Home » TYPES » Orchids » Cyrtorchis arcuata
Back to Category Overview
Total images in all categories: 12,061
Total number of hits on all images: 7,359,910 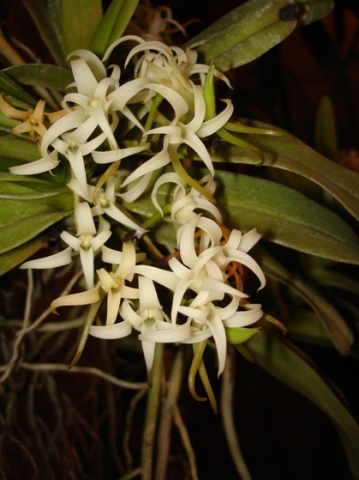 Cyrtorchis arcuata is a robust epiphytic orchid growing woody stems up to 40 cm long and 1 cm thick, covered in persistent leaf bases. The stems multiply into large clusters. The young visible roots are white with greenish orange tips, turning grey over time as they thicken and lengthen.

Two of the about 15 species of the Cyrtorchis genus are found in South Africa, the others in Africa. The species distribution is widespread from George in the southern Cape, the Eastern Cape and KwaZulu-Natal coastal areas through the Mpumalanga and Limpopo Lowveld to Africa where it is found in many countries.

It grows at elevations up to 1000 m on rocks and trees, in both dry scrub and moist forest, characterised by temperate conditions free from frost. The species is not considered to be threatened in its habitat early in the twenty first century (Liltved and Johnson, 2012; Pooley, 1998; www.zimbabweflora.co.zw; www.redlist.sanbi.org).