Home » TYPES » Orchids » Cynorkis kassneriana lax inflorescence
Back to Category Overview
Total images in all categories: 12,082
Total number of hits on all images: 7,379,721 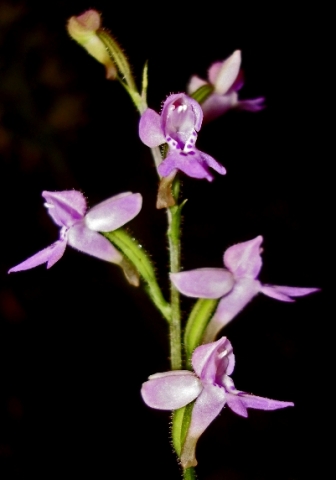 The inflorescence of Cynorkis kassneriana may be lax as in this photo or densely flowered. It becomes up to 12 cm long.

The insect-like corollas in picture appear as though they are attempting escape from the hold of their controlling green ovaries, in a bid to fly away. Coloured brightly as they are, they would have to be fast and agile to survive in a world populated by so many hungry insectivorous species.

Evolution has not reached the stage of fly-away flowers, at least not on earth. Who knows what tomorrow might bring... flower-eating being common animal practice (www.zimbabweflora.co.zw; www.africanorchids.dk).