Home » TYPES » Orchids » Pterygodium dracomontanum flowers
Back to Category Overview
Total images in all categories: 9,183
Total number of hits on all images: 4,102,101 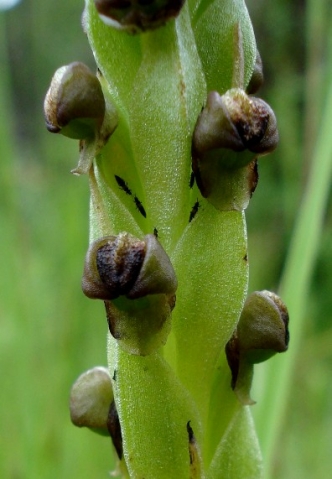 The flowers of Pterygodium dracomontanum, previously Corycium dracomontanum, grow in a many-flowered, dense and erect raceme of about 13 cm long. The pale green bracts below each flower are borne erectly, tapering to their acutely pointed tips. The bracts may be keeled, especially near their broad bases and covered in glistening surface cells as in the photo.

The sepals are green in various shades across the geographical distribution of the species, dull dark green in the photo. They turn black over time. The petals, positioned on the flanks of the dorsal sepal are green, as is the lip with a purple tinge added; the lip appendage usually bright green.

The sepals are broad, rounded with concave inner surfaces and curving in. The lip, attached to the column, is thick and roundly ovate, its appendage shield-like with blunt lobes that spread (not recurve) and has a stalk-like base; the lip covers the anther. Flower size is 15 mm by 7 mm.

Pollination is mainly done by oil-collecting bees: the plants secrete this oil instead of nectar. This is another evolutionary solution among the many interspecies survival pacts; maybe oil significance is more widespread than thought earlier.

The way mutual benefits are enjoyed on a durable basis by bee and an orchid are exemplary. Evolution crafts miracles of cooperation in the land of the living.

Flowering happens from late spring to early autumn. This specimen was photographed during January (Liltved and Johnson, 2012; Wikipedia).