Home » TYPES » Orchids » Bartholina burmanniana
Back to Category Overview
Total images in all categories: 9,840
Total number of hits on all images: 4,473,892 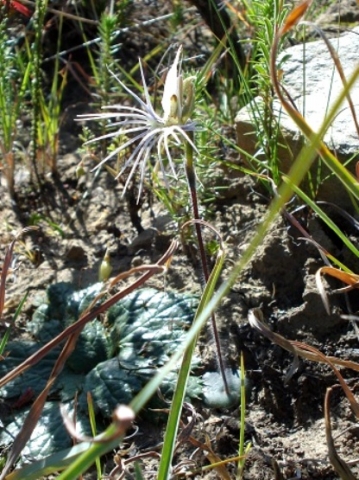 Bartholina burmanniana, one of South Africa’s two spider orchid species, is distributed in nature from Nieuwoudtville to the Cape Peninsula and eastwards to Uitenhage in the Eastern Cape. The habitat is flats and lower slopes in clayey soil.

One more or less heart-shaped to rounded leaf that lies flat on the ground grows annually in winter from the plant’s perennial tuber. The leaf with its shiny surface may be present or already dried out at blooming time in early spring. Flowers are usually seen only in the first season after a fire.

B. pectinata is an earlier name of B. burmanniana. There are only two Bartholina species in South Africa (Manning, 2009; Vlok and Schutte-Vlok, 2010; Wikipedia).