Home » TYPES » Orchids » Angraecum sacciferum
Back to Category Overview
Total images in all categories: 11,417
Total number of hits on all images: 6,198,275 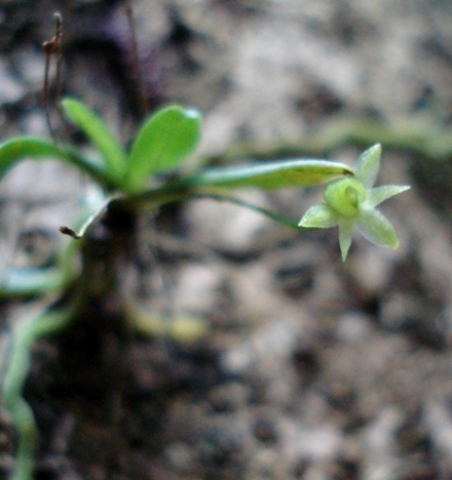 Angraecum sacciferum is an epiphyte growing erect stems of 4 cm. The specific epithet, sacciferum, is derived from the Latin words saccus, a sack or bag and fero meaning to bear or to carry. This refers to the pouch-like or saccate spur of the flower.

The plant bears four to eight leaves sheathed at the base. The leaves are stiff and erect with flat, dark green surfaces that are obscurely two-lobed.

The species distribution is widespread, from Knysna and Uniondale in the southern Cape through KwaZulu-Natal and the Lowveld of Mpumalanga and Limpopo to tropical Africa.

The habitat is forest shade, forest margins and scrub where variable degrees of moisture and temperature as well as other seasonal conditions prevail. The species is not considered to be threatened in its habitat early in the twenty first century (Liltved and Johnson, 2012; http://redlist.sanbi.org).