Home » TYPES » Orchids » Angraecum chamaeanthus
Back to Category Overview
Total images in all categories: 12,068
Total number of hits on all images: 7,363,057 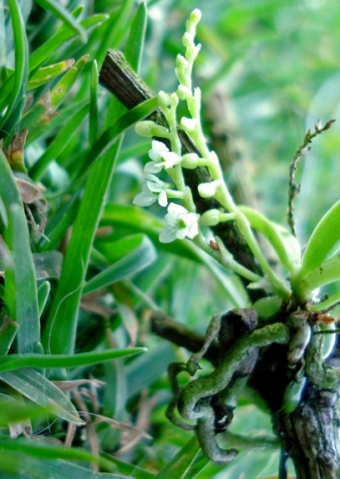 Previous
Image 8 of 82
Next

Angraecum chamaeanthus is an epiphytic orchid growing on twigs of trees. It is a tiny herb that produces short stems.

A. chamaeanthus is only rarely found in South Africa, in the provinces of Limpopo and Mpumalanga. There are more of them over the border in some neighbouring states from Zimbabwe and Mozambique to Kenya. These plants grow in shade of humid, montane forests.

Apart from in indigenous tropical forests, it is also sometimes seen on exotic fruit trees, which brought the plant the common name of guava baby. The generic name, Angraecum, is derived from a Malay word for orchid.

The Angraecum genus comprising 220 species, commonly known as the comet orchids, occurs in tropical and southern Africa. It is also represented in Sri Lanka, Madagascar and the Indian Ocean islands known as the Mascarenes. Plants of this genus have no pseudobulbs. They have thick, hard leaves, a concave lip without obvious side lobes, but with a definite spur (Liltved and Johnson, 2012; www.zimbabweflora.co.zw; www.africanorchids.dk).