Home » TYPES » Orchids » Aerangis mystacidii
Back to Category Overview
Total images in all categories: 11,528
Total number of hits on all images: 6,610,491 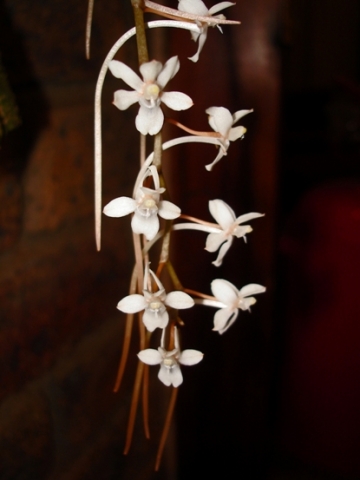 Previous
Image 5 of 82
Next

Aerangis mystacidii is a miniature epiphytic orchid, a monopodial herb with one growth axis, extending from its apex. An epiphyte is a plant that grows upon another plant without drawing food or water from it. A. mystacidii grows to 8 cm in height, its silvery green roots that have orange-green new tips visible.

The specific name is derived from mystax, an ancient Doric Greek word (also found in Latin), meaning moustache and referring to the shape of the lateral petals.

The species distribution is large, ranging from the Eastern Cape to Zambia and Tanzania. Several Aerangis species grow in Kenya, although not this one. The habitat is near the floor of moist evergreen forests in deep shade, often near streams, otherwise in high rainfall woodland conditions. The plant grows at elevations from 60 m to 1800 m. These plants are often seen on twigs overhanging water, rarely on rocks.

A. mystacidii is used in traditional medicine. The species is not considered threatened in its habitat early in the twenty first century, its population stable (Pooley, 1998; Blundell, 1992; www.orchidspecies.com; www.redlist.sanbi.org).