Home » TYPES » Orchids » Acrolophia micrantha
Back to Category Overview
Total images in all categories: 11,417
Total number of hits on all images: 6,198,376 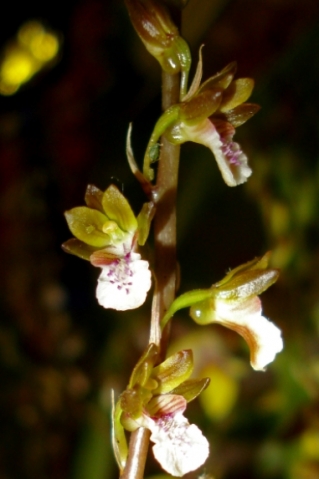 Previous
Image 2 of 82
Next

Acrolophia micrantha is a ground orchid that reaches heights from 30 cm to 45 cm. The evergreen geophyte grows from a whitish corm. The leaves are narrowly lance-shaped, imbricate (overlapping like tiles) and keeled, their margins smooth to finely toothed.

Acrolophia plants differ from Eulophia in their flower stems that emerge from the top of the leaves, not as separate side-shoots.

The species distribution in the Western and Eastern Cape lies from the eastern shore of False Bay to East London along the coast and over the mountains in the Langkloof.

The coastal habitat is mainly sandy flats, also on limestone and on rocky slopes, some plants occurring close to the shoreline. The species is not considered ot be threatened in its habitat early in the twenty first century, its population stable (Liltved and Johnson, 2012; www.redlist.sanbi.org).