Home » TYPES » Orchids » Acrolophia micrantha flower from the side
Back to Category Overview
Total images in all categories: 12,086
Total number of hits on all images: 7,380,799

Acrolophia micrantha flower from the side 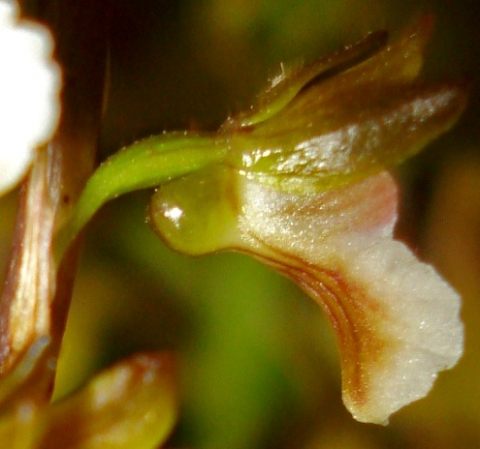 Previous
Image 3 of 82
Next

Seen in profile here, the lip of an Acrolophia micrantha flower is still its dominant feature. Brown lines run along the centre on the lower surface of the lip from its base to near its tip, in the same area where white or purple papillae are present on the upper surface.

Large, glistening surface cells give the lip an uneven appearance, matching the slightly ragged line of its margin. The reddish lines on top of one lateral lip lobe are visible through the blade in the photo.

The about spherical, shiny spur at the back of the lip is sac-like or pouch-like; it exhibits a greenish translucence like a drop of liquid. The flowers of this species produce tiny quantities of nectar for pollination services trading. This accounts for the high insect activity around the flowers.

The curving pedicel bulges gradually into the ridged, green ovary at the back of the flower. The oblong lateral petal visible in the picture is partly shielded by one oblique lateral sepal as well as by the median sepal, all three of them looking similarly green and brown, shiny and visceral (Liltved and Johnson, 2012).