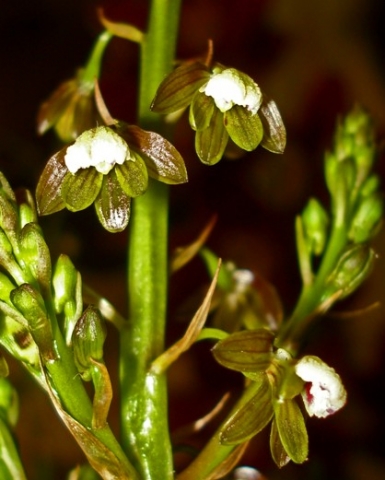 Previous
Image 1 of 82
Next

The flowers of Acrolophia cochlearis grow in inflorescences that may branch into as many as five racemes. The inflorescence is usually many-flowered, the density of the small flowers variable upon the stem.

A flower becomes only 7 mm long. The bract below each flower’s pedicel is linear to narrowly lanceolate, up to half as long as the pedicel. The flowers of this species are non-resupinate, the lip positioned at the top of the open flower.

The lip is the conspicuous corolla item of this species, coloured pale yellow as opposed to the shiny brown of the other petals and the three sepals tinged purple on their veins. The lip shape is broadly obovate, slightly three-lobed with an incurved scalloped (crenate) margin.

The lateral sepals and petals spread, the median sepal (positioned at the bottom of the flower) may be up to 5 mm long. A sac-like, rounded spur is present.

A. cochlearis is one of the Acrolophia species that produces nectar, bees playing a role in the plant’s pollination. The specific name, cochlearis, comes from the Latin, cochlea, meaning snail shell or spiral and refers to the shape of the flower lip.