Home » TYPES » Orchids » Acrolophia cochlearis
Back to Category Overview
Total images in all categories: 12,068
Total number of hits on all images: 7,363,088 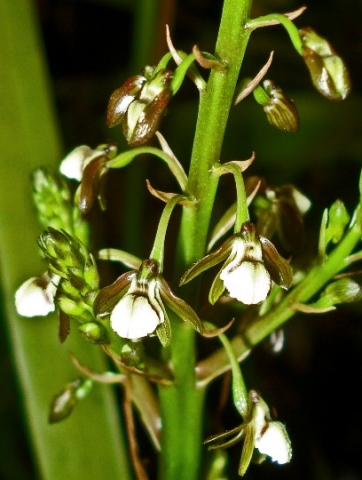 Acrolophia cochlearis is a robust orchid growing to 1 m in height. Its linear-lanceolate and keeled leaves are produced in two opposing ranks. The leaves taper to acutely pointed tips and sheathe at the base.

The plant produces thickened roots, not tubers or pseudobulbs as found on Eulophia plants. Acrolophia species are allied to Eulophia, having earlier formed part of that genus.

The genus Acrolophia comprises seven species, two of which (including A. cochlearis) are distributed wider than the Cape Floristic Region. The species distribution of A. cochlearis is widespread, from the Cape Peninsula to Zululand.

The habitat is mainly coastal mountain slopes (up to elevations around 400 m) and flats down to near sea-level; plants growing in damp, sandy soil.

The generic name, Acrolophia, is derived from the Greek, akros meaning summit and lophos meaning crest, referring to the crest on the lip of the flower or the fact that Acrolophia plants flower from the tops of their stems, rather than from the base as in Eulophia (Liltved and Johnson, 2012; Pooley, 1998).