Home » REGIONS » Namaqualand » Pachypodium namaquanum, a committed sun worshipper
Back to Category Overview
Total images in all categories: 12,086
Total number of hits on all images: 7,381,034 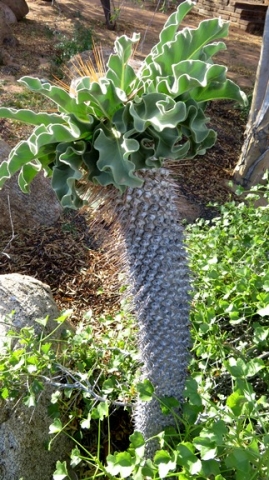 Slightly inclined towards the north, the sunnier side in the southern hemisphere, a Pachypodium namaquanum plant is old when this tall. At an estimated growth rate of 1 cm in height or one row of spines per annum, a leader of the clan standing 2,5 m on its roots may be 250 years old!

The sharp-tipped, rigid spines upon the stem are longer near the stem tip, those in the crown centre on top the longest of all. The older this plant gets, the longer its newly produced weaponry becomes, unlike some of the spiny tree species (like Ziziphus mucronata) that do not bother to grow thorns when old, big and comfortable in copious seed production.

Thus one’s habit, features and nature also determine one’s enemies. To survive, the appropriate defences have to be developed in the adapt or die tradition. Still, those few P. namaquanum plants that do grow branches curve them up like arms in cowboy movie surrender mode.