Home » REGIONS » Namaqualand » Ozoroa dispar known as t'orrie since time immemorial
Back to Category Overview
Total images in all categories: 11,793
Total number of hits on all images: 6,942,260 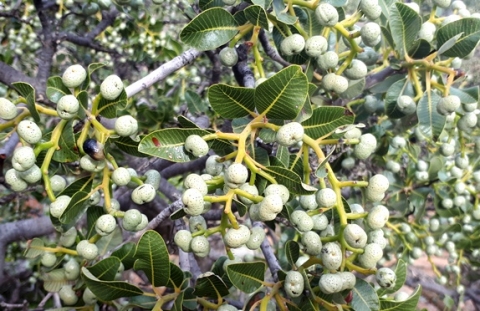 These pale green fruits of Ozoroa dispar with pitted surfaces were seen in the Goegap Nature Reserve early in August. The dioecious species bears fruit only on the female trees. The fruits will be black when ripe and poisonous to humans, although not to birds.

This warning was noted in Simon van der Stel’s journal of his 1685 trip into Namaqualand. As Governor of the Dutch settlement existing in the Cape at the time, he paid a visit to the copper mountains of that region after local inhabitants had shown him high grade copper in 1681.

Copper mining did develop but only from about 1852 onwards, gradually reducing by high grade ore inavailability and dips in the copper price in the first half of the twentieth century (Mannheimer and Curtis, (Eds.), 2009; Le Roux, et al, 2005; Coates Palgrave, 2002; Eliovson 1990; iNaturalist; www.miningweekly.com).