Home » REGIONS » Namaqualand » Lapeirousia silenoides
Back to Category Overview
Total images in all categories: 11,528
Total number of hits on all images: 6,611,338 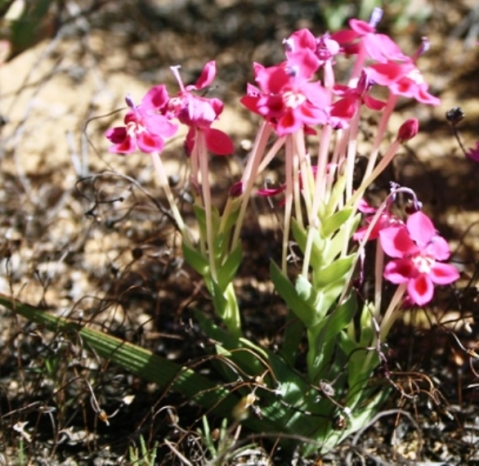 Lapeirousia silenoides produces an attractive, bright pink to magenta flower with cream coloured petal markings. Three of the adjacent six petals have distinct darker colour patches than the opposite ones. Such flowers are called two-lipped.

The plant is a winter-growing perennial geophyte found in sandy soil among granite rocks. The forty species in the genus all produce corms, many of which are small and bell-shaped.

There is a busy little fly in Namaqualand called Prosoeca peringueyi with a very long tongue that acts as sole pollinator for this and sixteen other spring flowering species. For its sake hopefully it is in a dormant phase once all the food disappears (Cowling and Pierce, 1999).