Home » REGIONS » Namaqualand » Lachenalia carnosa
Back to Category Overview
Total images in all categories: 11,528
Total number of hits on all images: 6,611,416 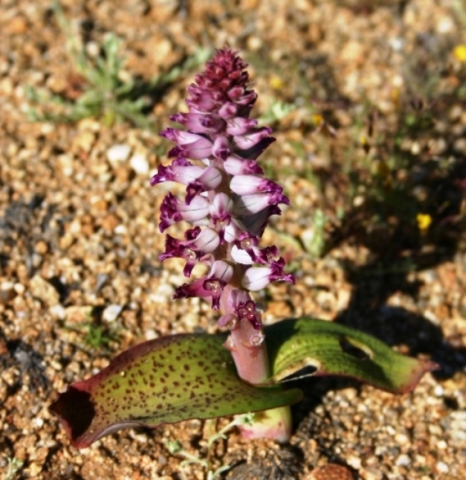 Lachenalia carnosa is one of six Namaqualand species of this genus of perennial bulbous plants. The higher rainfall Western Cape to the south has more Lachenalia species, many with bright crimson or golden flower colours. The more northerly members from the lower rainfall area tend to favour mauve, violet, blue, pale yellow and white corolla colours. Lachenalia plants produce spikes or racemes of tubular flowers on fleshy stems, usually shorter than 25 cm.

L. carnosa used to be called L. ovatifolia. It has two fleshy green leaves with upturned, entire margins. The plant typically grows in sandy soil. The leaves that clasp the stem lie flat on the ground or are held just above it.

(There is more on this plant in the Lachenalia Album under Genera.)