Home » REGIONS » Namaqualand » Klipspringer at rest
Back to Category Overview
Total images in all categories: 12,068
Total number of hits on all images: 7,360,739 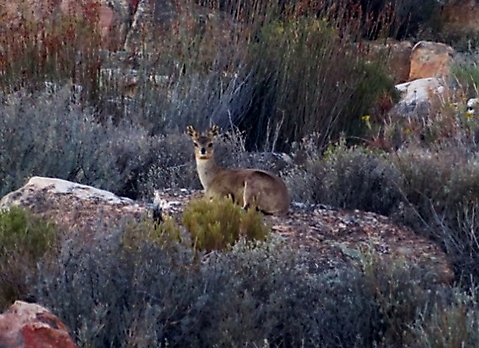 The female is a kilogram or two heavier than the male. She makes up for the absence of the spiky horns by a little extra mass in other places.

So, this one is a guy. He may be living alone as klipspringers sometimes do. A couple may at times still be accompanied by their youngest offspring. Klipspringers are monogamous more often than most antelopes.

Scientifically called Oreotragus oreotragus, the klipspringer's geographical distribution range in Africa occurs mainly in two discrete, large regions: The first is in the southwest of the Continent from Angola across most of Namibia and along the South African west coast to the Western Cape (also along the lower Gariep) and eastwards from the Cape to the west of the Eastern Cape; the second is from northern KwaZulu-Natal up the east of Africa to Ethiopia, Eritrea and Somalia.

Klipspringer shoulder height is just over 50 cm, the length of the animals from 80 cm to 1 m, while tails and horns get 8 cm long. The small body is covered by a thick, coarse coat of grey to red-brown hairs that are brittle and hollow, effective camouflage where they live.

Forever vigilant and immobile for longish periods to make the camouflage work, klipspringers are mostly found on rocky hills and mountains where shrubs or trees grow among the boulders and grass of their favourite places. Walking over angled rocks on tiptoe without slipping is facilitated by the rubbery outer edges of their hooves.

Although stocky in build, the klipspringer is agile, not called a rock jumper for nothing. Resting in shade in the middle of the day and on dark nights, goes with either browsing or grazing as the mood takes them when all is peaceful and pleasant.

A good life they lead up here in the hills, their ground at least partly protected these days, but increasingly also on farms and veld near protective people (Riette, 2016; Wikipedia).